Continuation of Part One – Upon strolling the crags and valleys of Arthur’s Seat with a friend in Edinburgh one day, they sat on a rock nearby where ragged boys would gather. By way of experiment Rev Guthrie said, “would you go to school if, besides your learning you were to get breakfast dinner and supper there?”. A flash of joy broke from the eyes of one of them, as on hearing this the boy leapt to his feet. He exclaimed, “Aye, will I sir, and bring the hail land (tenement) too!”

On publication of Rev Guthrie’s first ‘Plea for Ragged Schools’, in which he displayed great pathos, a powerful interest was evoked in Edinburgh. The response was so liberal that a Committee was formed, and steps were taken to initiate the movement, which was first launched in June 1847.

Through the kindness of Rev Mr Smith and the Kirk-Session of the Tolbooth parish, a large and commodious school room was provided at Ramsay Garden, Castlehill in Edinburgh. The aim was ‘to reclaim the neglected and destitute children of Edinburgh by affording them the benefits of a good common and Christian education, and by training them to habits of regular industry, so as to enable them to earn an honest livelihood, and fit them for the duties of life.’

The movement grew and prospered. I could continue apace. The source I used for these articles is inspiring and uplifting. You can read it in the National Library for Scotland on George IV Bridge, Edinburgh. I urge you to indulge in its’ pages, and gain a real understanding of Rev Thomas Guthrie DD. He is certainly on my top list of people I would love to meet, when God comes calling.

To read about Rev Thomas Guthrie’s courage to make a momentous decision due to a passionate conviction during the Great Disruption, click here

After seven years in the country parish of Arbilot, Rev Thomas Gurthie was called to serve at Old Greyfriars. His initial impressions of the parish were not good. The Cowgate appalled him. He described it as, “one of loopholed poverty, where men and women were hung with rags, and naked, cracked red ulcered feet oflittle shivering creatures trod the iron streets”.

Guthrie’s heart was stirred to the utmost depths by the wretched poverty he saw around him. Having surveyed the scene and thought how best he could deal with it, Rev Thomas Guthrie devoted his entire energies to the moral, social and educational improvement of his parishioners. 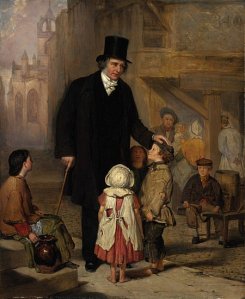 Rev Thomas Guthrie with Children from his Parish

Rev Guthrie at that time  belived in the established church of all classes. He was annoyed at the Edinburgh town council laying on seat rents which merely excluded the poor. In 1840 he got a new church and parish close to the Cowgate called St Johns (this is different from the one at the West End of Edinburgh city centre, which is episcopalian). Here he was able to instigate a highly successful experiement. That of allocating one portion of the seating to local parishioners, and allowing the rest to be let to the public at high rates.

He had not however been minister at St Johns for long before the revolution of ecclesiastical arrangements which affected the whole of Scotland, the Great Disruption.

The focus in this article is his work for the poor. On visiting a decaying borough on the south shore of the Firth of Forth he saw a tavern landscape painting depicting the kindness of a Portsmouth cobbler. This man took pity on the ragged children, gathered them in and brought them God and the world. He rescued no less than 500 of these children from misery. From that moment the idea of creating a ragged school became fixed in the mind of the Rev Thomas Guthrie.

Photo source: Rev Thomas Guthrie on a Mission of Mercy

Rev Thomas Guthrie DD at   the time of the Great Disruption

Those who joined the Free Church of Scotland did so for reasons I will let the great Rev Guthrie explain himself, when he referring retrospectively to the Great Disruption in a speech to the Assembly in 1862 he said, “I look upon it as a serious calamity when the civil and church courts come into collision. We may yield to what we think wrong in civil matters, but we cannot yield to what we think wrong in spiritual matters.”

He goes on to state that whilst preparing to preach in a previous ministry of Strathbogie one Sabbath, he was handed a Court of Session interdict by a servant of the law, forbidding him to preach in either the body of a kirk or a graveyard. His response was that he acknowledged the law servants duty, and advised that he would do his. The penalty for breach of this interdict was “to get lodgings free gratis in the Calton jail”!

The Rev Guthrie put the interdict under his foot, and preached the gospel. He defied the law to punish him and did not.

He was one of the most prominent leaders of the Free Church movement. When he preached at Tanfield Hall the cheery tone of his voice was enthusiastically welcomed by the multitude who had attended worship there.

On 18th May 1843 he advised his parishioners, “I am no longer minister at St Johns (Cowgate). I understand that this day there has been a great slaughter in the Old Assembly” (Church of Scotland General Assembly). I know they have resolved to declare my church vacant. They may save themselves the trouble.” Stern words indeed.

The Rev Guthrie never regretted the Great Disruption. He cordially rejoiced in the fruits it had produced. Some twenty years from the final struggle, he stated “The right of a church to rule her proceedings by the ordinances of her own Divine Head are clearer to my eye than ever. We left the establishment for liberty, and liberty is sweet. We laid down our livings for it. We will never repent.”

The Rev Guthrie went on to prove more popular than ever.

The Rev Thomas Guthrie proved in his lifetime not only to be a man of good heart, but also one of very firm belief. Had he been a war leader, he would undoubtedly have led from the front with admirable zeal. He will always be one of my heroes. His grave can be seen at the Grange cemetery in Edinburgh

Rev Thomas Guthrie was inspirational in educational social change in the mid-19th century. Read about his role in the creation of Ragged schools here

The image of his resting place at The Grange is taken from here.